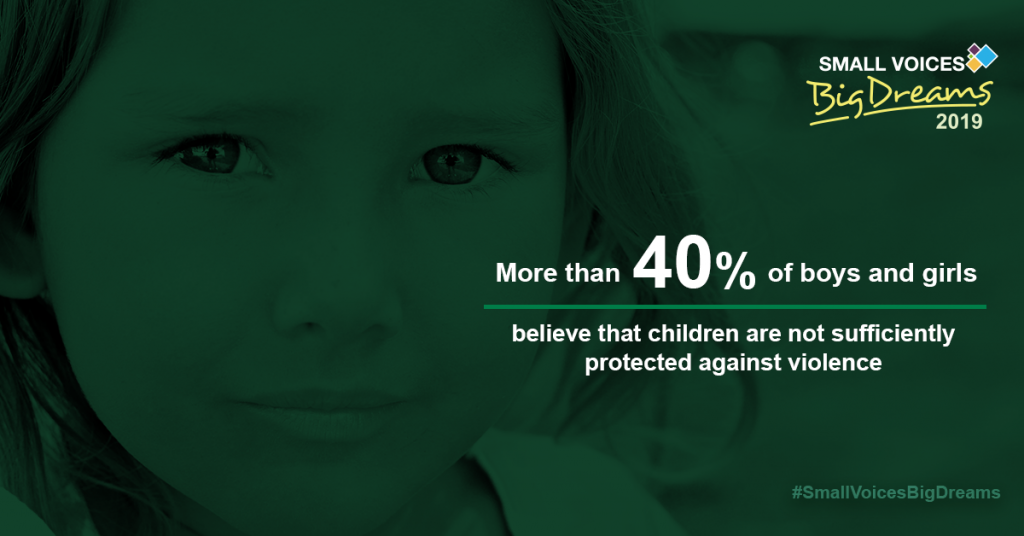 This global report includes a survey of almost 5,500 children aged between 10 and 12 years old from 15 different countries, as well as 21 group interviews, and provides startling insights into the perceptions of children and adolescents throughout the world about violence, and the efforts of adults to protect them from it.

More than 40% of children across the globe believe they are not adequately protected from violence, with girls expressing a higher perception of insecurity, and one in two believe adults do not listen to their opinions on important matters, according to the report which features one of the largest child surveys of its kind.

Just weeks away from the 30th anniversary of the Convention on the Rights of the Child, the report calls for far greater involvement of children in decision-making on issues affecting them, particularly the prevention of violence, and urges world leaders to listen to children and take action based on their recommendations.

“Every year more than a billion children around the world experience violence and exploitation – that’s more than one in three. It’s a global scourge that cuts across borders, class, culture, ethnicity, race, gender, and socioeconomic status,” said ChildFund Alliance Secretary General Meg Gardinier.

“Yet rarely do decision makers take into account the opinions, experiences, and expectations of children,” she added. “This report provides insights into the voices of children who talk about suffering from fear, low self-esteem, and loneliness because of the adults around them, and who are often left feeling unprotected and unheard. Today we are calling for children to be part of the decision-making process on issues that affect them. Children have so much to contribute toward global efforts to end violence against children, and the success of any policy or action aimed at children depends on our ability to engage and respond to their voices.”

According to the report, children highlighted three main causes of violence: their own defenselessness, the cycle of violence, and adults’ loss of self-control due to substance use.

Children also reported that there was almost always a power imbalance between victim and aggressor in violent situations, and more than half said that violence occurred because children could not defend themselves from adults or older children.

Some of the key findings of the survey are:

– One in two children say adults in their country do not listen to their opinions on issues that matter to them;
– Nine in 10 believe the most important thing adults can do to end violence against children is to love children more and listen to what they have to say;
– More than 40% believe that children are not sufficiently protected against violence in the country they live in;
– More than two-thirds of children (69%) reject violence as an educational tool;
– Only 18.1% of children think that politicians and the people who govern protect children from violence.

“While the government of Bangladesh was one of the first signatories of the UNCRC and made good progress in promoting child rights, there still needs to be a good cultural awareness for protecting the rights of the children”, said Johny M Sarkar, Country Director, Educo Bangladesh.

José Maria Faura CEO of Educo, a member of the Alliance, said: “Sadly, no matter where they live, and no matter who they are, no child is immune to violence. In many parts of the world, violence against children is occurring at epidemic levels. We know that when children experience violence, whether it be physical, sexual, or emotional, it can have a catastrophic impact on their sense of self-worth, their cognitive development, and their ability to achieve their full potential.

Often, they are targeted because they are physically smaller, and are perceived as being easy prey. That’s why we need to empower children to be part of the decision-making process. Children should be involved when it comes to developing any policy or action aimed at helping children.”

Ainhoa, a report participant from Spain said, “What adults need to do most of all is try to understand what happens to children and try and understand how we are feeling.”

Noemi, another participant from Honduras, told us “We need to be listened to. Our voice is important.”