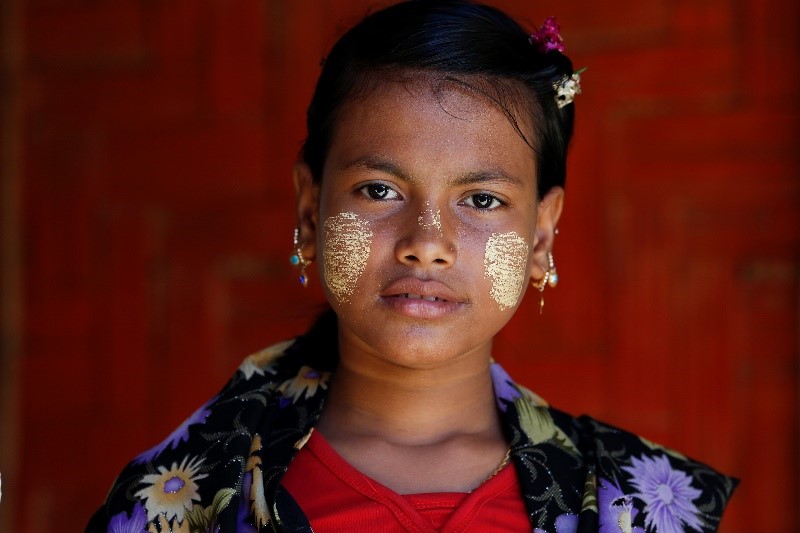 At first glance, Minijian, 11, seemed to be enjoying a life like an ordinary teenage girl. The day Educo staff met her, Minijian was wearing the traditional Burmese beauty balm thanaka on her face, a yellow paste made from ground tree usually applied prominently on women’s cheeks and nose. But like many women and girls in living in refugee camps in Cox’s Bazar, Bangladesh, Minijian’s life is far from ordinary.

Minijian is the third child among the 6 siblings. Her father died in Myanmar due to illness while her mother lives with them at the camp. Minijian narrated the harrowing ordeal she and her family went through two years ago just to reach the Bangladesh border and escape the conflict in Myanmar.

Minijian shared: “When we were coming here [from Myanmar], we were afraid as we thought they [Mogh or Burmese Army] would kill us. They have killed and slaughtered many people in Burma. We went through the jungle and suffered because of lack of food and water. It was raining heavily during that time. We lived 6 days in the jungle. We were afraid that we might be even chased by the tigers.”

“In Burma, they tortured us a lot. That’s why we had come to Bangladesh. We came here after Qurbani Eid (Eid-Ul-Adha).”

Eid-Ul-Adha is one of the two Islamic holidays celebrated worldwide each year. Minijian shared that her entire family had to travel 11 days to reach the border and found themselves fortunate to pass through dark forests, hills and rivers.

Nowadays, Minijian attends a learning center run by SKUS, a local NGO partner of Educo. When she learned about the learning centre, she had asked her mother to enrol her in the class. Her favorite subject is the Burmese language. She particularly enjoys drawing, physical exercises and storytelling, among others.

“They [teachers] teach us poems and exercise. We study by writing on the blackboard and reading. They also allow us to play, which we love.” 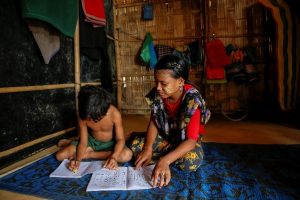 Minijian helps her younger brother study. A teenage Rohingya refugee in Cox’s Bazar, Minijian says she hopes to return to her hometown in Myanmar one day

At home, Minijian likes helping her mother with the household chores. Even though things seem normal for Minijian, she said that she still vividly remembers and misses her hometown.

“I missed my playmates, classmates and relatives when we were coming here. On our journey to Bangladesh we were worried and afraid, “Where will we go? Where will we live? What will we eat?”

Minijian also shared her fears living in the camp as she was told of stories about child trafficking and sexual abuse. Minijian said:

“As a girl I am afraid at night in the camp because some unknown people might take me away at night. [That is why] I am afraid to move alone at night.” Minijian shared that she needed to return home before it gets dark.

Two years on, Minijian says she still wants to return to her hometown in Myanmar but wants to be reassured that they would live a life in peace. She answered:

“I always think [about] when we can return to Burma? If they make peace there, I will return to Myanmar. Otherwise, they [the Mogh army] will torture us again.”

Maria, 12, also a student at Educo partner’s SKUS learning center, found it all too painful to describe what she and her family had to endure to escape persecution in Myanmar.

Maria is the fifth children among the 7 siblings. After living at the camp for two years, Maria’s father now works at one of the Madrashas (Islam-centered schools) in Cox’s Bazar while her mother helps the family by working as a tailor. 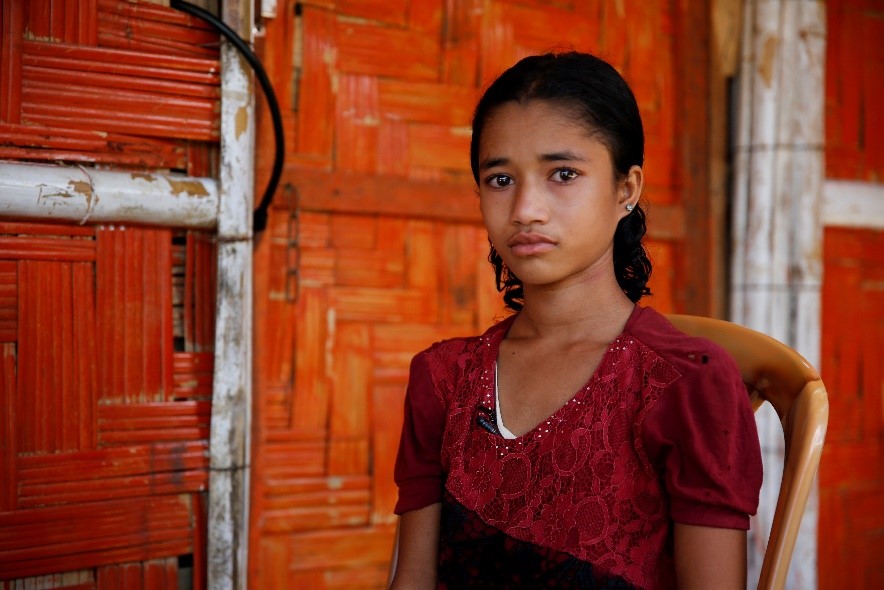 Maria, 12, a teenage Rohingya refugee in Cox’s Bazar, was in tears when she talked about fleeing her hometown in Myanmar

Maria loves to go to the school and the Madrasha at the camp. Burmese and English are the classes she enjoys the most.

When Maria shared how she and her family arrived in Bangladesh, tears immediately swelled around her eyes. She said:

“We traveled from Burma to here by foot. It took us 10 days to travel to Bangladesh. We did not have enough food and water. My mother tripped over as we were walking. We had to cross a big creek. We were very worried while traveling, about where to go, where to stay and what to eat.” Maria and her parents were constantly worried about how her family would live and survive in the camp.

When asked about her fears and worries now, Maria shared that she does not risk going out at night. She said: “I am scared to go out at night as child abductors might kidnap us.”

With the school keeping her busy at the camp, Maria shared that she has gained some new friends at the school in the camp. But Maria could broke in tears recalling her time with her playmates in her hometown. Maria said:

Md. Tareq Islam, Chief Psychologist at SKUS, an Educo partner, told Educo that sexual abuse and exploitation are only some of the serious risks women and girls face in the camp.

Mr. Islam also fears that many of the Rohingya people are feeling hopeless because of the uncertainties living in the camp.

Even though Maria had a painful childhood, she refuses to give up and continues to dream for herself and her community. Two years on, Maria holds on to her dream. She said:

“I want to be a nurse or a doctor after completing my studies. I want to support every Rohingya patient in the camp.” 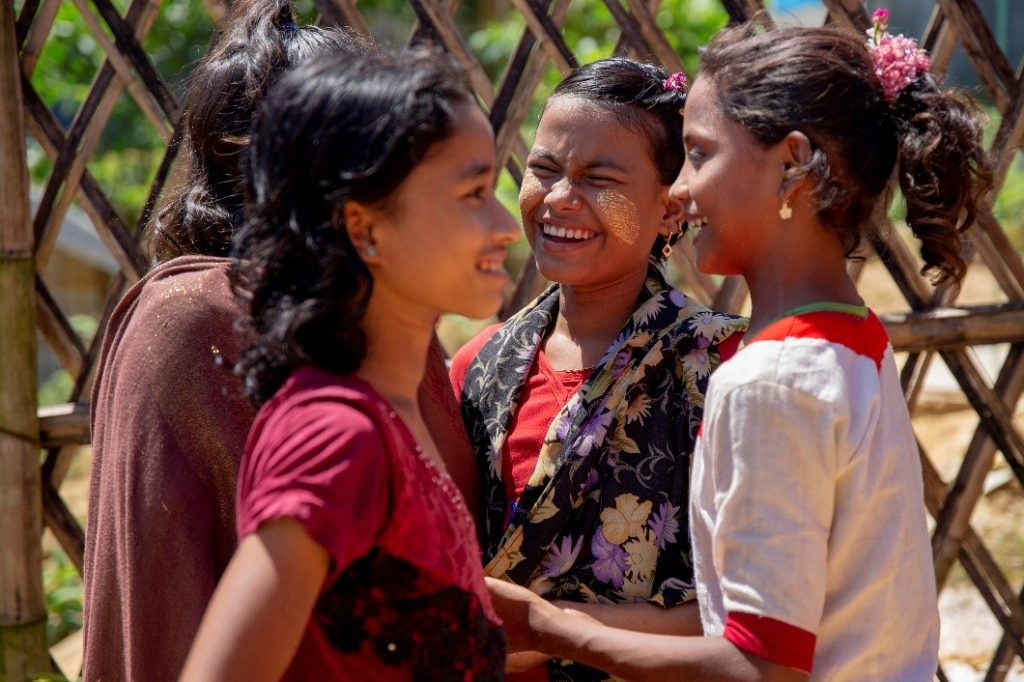