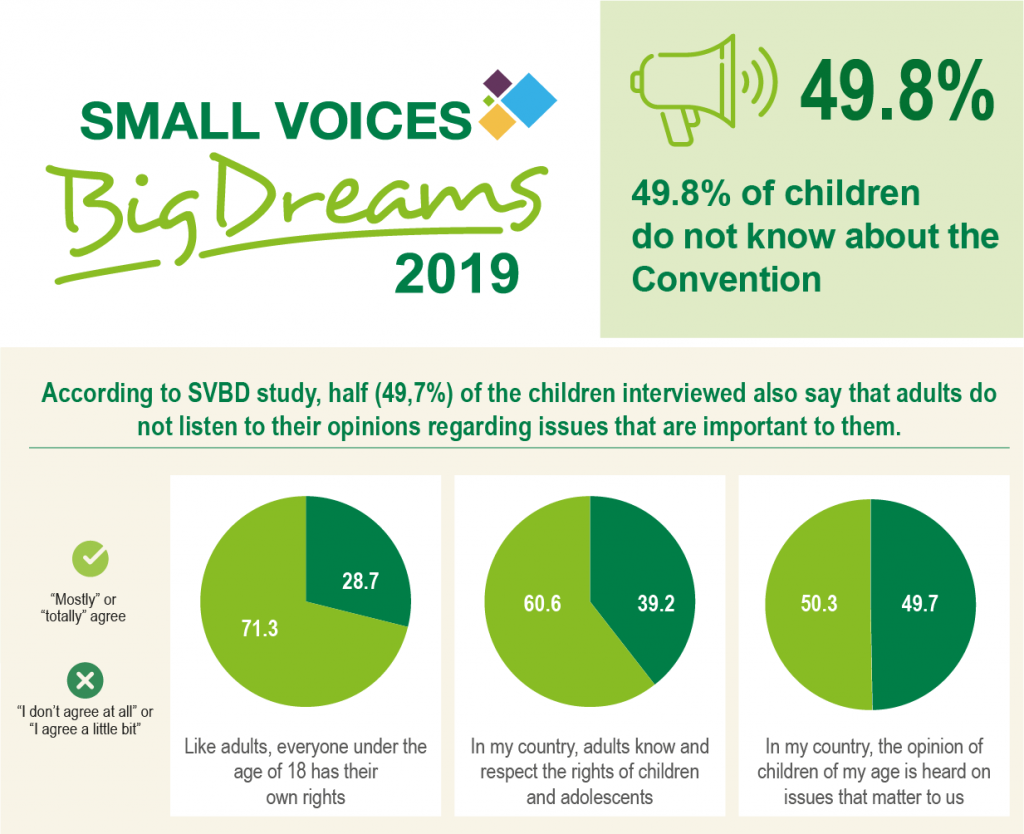 Even after 30 years since the United Nations adopted the Convention on the Rights of the Child, about 49.8% children do not know about it, according to a report by Educo and ChildFund Alliance.

The global report titled Small Voices Big Dreams*, includes a survey carried out among 5500 children aged between 10 and 12 years old across 15 different countries and provides startling insights into children’s views of violence and their perceptions on the protection children receive from adults and the people who govern them.

“Article 42 of the Convention demands that states actively promote children’s rights to the whole of society. However, half of children do not know about this text or what it is for. This figure shows that still a lot needs to be done in complying with the UNCRC even after 30 years since it was ratified.”, says Johny Sarker, Country Director of Educo Bangladesh.

Bangladesh government has made attempts to raise social awareness about the Convention of the Rights of the Child by disseminating it to a wide range of audience including the parliament, government offices, educational institutions, NGOs and the media. However, when it comes to awareness, many are still uninformed about the rights and provisions within the convention.

“Even though Bangladesh was one of the first countries to ratify the UNCRC, there’s still a huge gap here in terms of awareness and compliance. Despite the Bangladesh government’s initiatives and success particularly in areas such as 97% enrolment in primary education, a good number of children are still deprived of their basic rights”, Sarker adds. A survey by Educo in Bangladesh found that only 4.7% child domestic workers and 4.76% transport workers were aware about the fact that child labour is prohibited by the law. About 34% child domestic workers and 48.3% child transport workers were found completely unaware regarding the concept of hazardous child labour. The same study also found that 58.73% child domestic workers and 82.65% child transport workers never attended school. Such grim reports only connote the lack of compliance of UNCRC. There is also a lack of concrete quantitative data regarding the percentage of people aware about its provisions.

The “Small Voices Big Dreams” study also shows that half (49.7%) of the children interviewed also say that adults do not listen to their opinions regarding issues that are important to them.

Yukiko Yamada, Global Advocacy Director Educo says: “Defending children’s rights begins with listening to them. They have a lot to say, lots of ideas to contribute. Which is why it is vital to promote their participation in the decisions that affect them, and create appropriate spaces for that to happen in. And that participation begins by showing them that they have the right to give their opinion and be listened to, as stated in the Convention”.