Study: majority use children for hazardous work despite knowing about its consequences

Study: majority use children for hazardous work despite knowing about its consequences 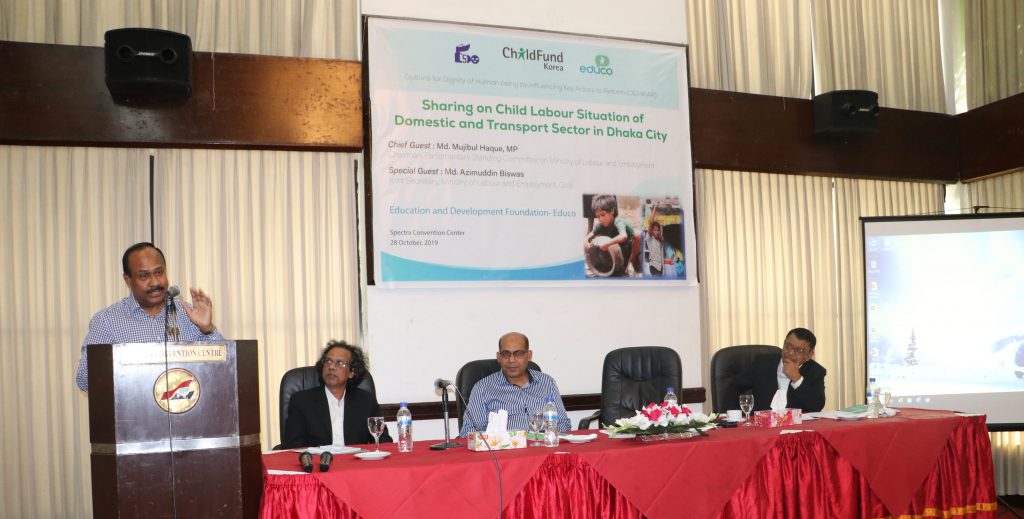 Majority of child employers are aware of the consequences of hazardous child labour, yet they use children for doing potentially life-threatening work. They do not know specifically about child labour related laws and policies and its provisions. They employ children for domestic work as adult workers are expensive and not always available. Both transport and domestic employers justify employing children saying that the children belong to very poor families and that the earnings they get from their work help support their families. Strong monitoring mechanism needs to be in place to make sure that children are not employed for hazardous work, including domestic and transport sector.

These findings and recommendations were disclosed at the Sharing on Child Labour Situation of Domestic and Transport Sector in Dhaka City held this Monday, October 28 at a convention centre in Gulshan. With support from ChildFund Korea, Educo is implementing a two-year pilot project entitled “Options for Dignity of Human being by Influencing Key Actors to Reform (ODHIKAR)” in partnership with Eco Social Development Organization (ESDO). The project has conducted a baseline study on child labour situation of two targeted sectors, which was shared at this event. Sharfuddin Khan, Child Protection Specialist and study team leader presented the findings of the study. Mr. Md. Mujibul Haque, MP, Chairman, Parliamentary Standing Committee on Ministry of Labour and Employment was the Chief Guest at the event. Md. Azimuddin Biswas, Joint Secretary, Ministry of Labour and Employment, was present as Special Guest. Johny M Sarker, Country Director, Educo Bangladesh presided the event.

The survey had been conducted among 544 child workers from both domestic and transport sector in 15 thanas of Dhaka City including direct intervention areas of ODHIKAR project. Both quantitative and qualitative approach were applied, and triangulated data were gathered from both primary and secondary sources.

The study found that hundred percent parents were unaware about the laws and policies regarding child labour. Although they had a general idea about the negative effects of and general prohibitions on child labour. Of the surveyed respondents 46.94% child domestic workers had been subjected to physical injury, 68.49% had been subjected to scolding from their employers, 17.14% were exposed to physical torture and as a result of these 35.51% suffered from mental trauma.

In his speech, Mujibul Haque emphasized the importance of attitudinal transformation for preventing child labour. “To eliminate child labour we must start from our own home”, he said. “Only policy making or law enactment cannot eliminate child labour in Bangladesh, change of traditional mindset of all level of citizens including the policy maker, law enforcer as well as the general people can bring the desired result”, he added.

“It is possible to eliminate child labour from Bangladesh within the targeted timeframe if we can give an integral effort through strong legal framework, capacity building and enabling environment”, said Azimuddin Biswas.

Johny M Sarker asserted that Government and NGO partnership can bring about a positive change to the life of child labourers. He expected that the government project of BDT 2.85 billion for the rehabilitation of one lac child labourer will be started soon. He further hoped that provision of psychosocial support would be considered to bring the child labourers back to normal life.

Other major findings of the study: