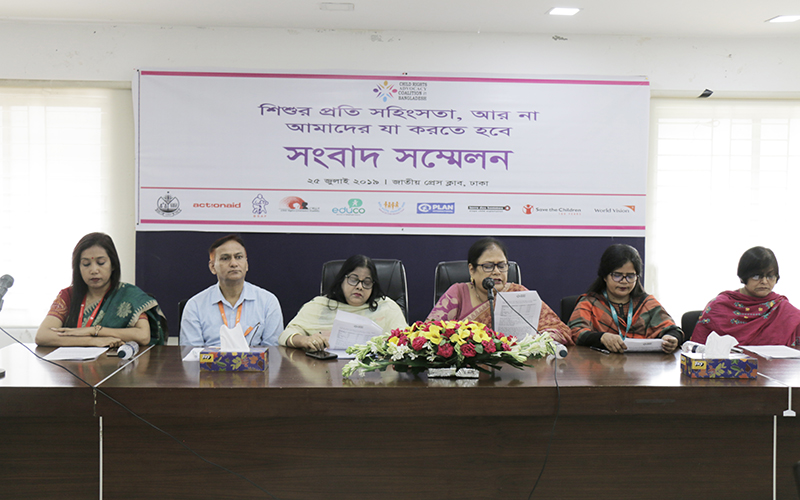 As many as 826 children were victims of violence in the last six months across the country. The information came out in a report revealed by the Child Rights Advocacy Coalition (CRAC) in Bangladesh at a press conference on July 25, 2019 at the Jatiya Press Club in Dhaka. Educo Bangladesh participated in the conference as a member of the coalition.

The coalition expressed concern over the rising trend in violence against children in the country and demanded that the government promptly complete the procedure to form a child directorate and a national child rights commission that will work on child protection and prevention of child rights violation.

The report was prepared based on reports of the incidents published in different newspapers between January 1 and July 20, 2019. According to data compiled by Ain-o-Salish Kendra (Ask) from nine national dailies, a total of 826 children have suffered from violence until July 20 this year. Of the victims 224 were murdered and 471 were raped of which 15 were boys. There were also 76 incidents of torture by teachers including sexual harassment of 27 children.

Recommendations by the coalition included formulation of a new law to end all kinds of abuse on children and follow-up system to ensure effective implementation of the law. They proposed the formation of a new court as stipulated by the children act 2013. In addition, they appealed for the deployment of sexual assault policies at academic institutions in line with the High Court directives and a special team to assist children in cases of violence against them. They also believed that an independent national commission should be formed for ensuring the rights of the children.