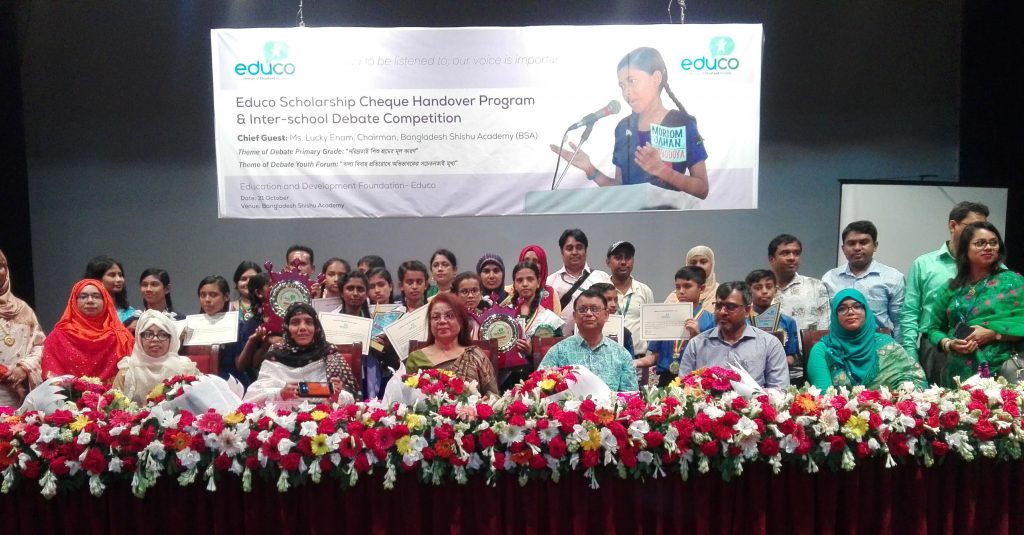 Educo has given academic scholarships worth Tk 1,163,088 to 208 poor and meritorious students. All the children who received the scholarships have passed Primary School Certificate (PSC) exams and are now studying in the secondary level. They previously studied in Educo-run schools. The finals of Educo’s Inter-school Debate Competition were also held in the same event.

Educo has been providing scholarships to students of the secondary level since 2006 to prevent school dropout and early marriages. The initiative was taken to ensure that students do not have to stop their education after passing the primary level.

In the finals of the debate competition Educo Pathshala Banshbari competed with Educo Pathshala Baburjaigah in the primary group and Educo Youth Forum Banshbari faced off with Educo Youth Forum Nayanagar in the secondary group. The teams from Banshbari excelled in both categories and became champions beating their opponent teams. The winning teams were each crowned with trophies. The entire competition was held for a period of almost three months where a total of 19 teams from Educo schools including six working children schools and teams from 14 Youth Forums had participated from which four teams were selected for the finals.

Lucky Enam, in her speech, praised the spirit and caliber of the debaters. She said, “Educo has been doing a phenomenal job, the knowledge of these little debaters is a testament to that.”

Recognizing Educo’s contribution in preventing child labour Dr. Rokhsana Chowdhury said, “In addition to government’s educational and medical support for the working children, I would try to take steps to provide financial stipends for them so they can continue their education.”

“Educo doesn’t only work with education, children’s health and protection are also our focus areas”, said Johny M. Sarker. He congratulated the debaters and scholarship winners for their excellent performances.